Adventures with Pastry: Pics of the Baked Bean Sausage Rolls

As I said the other day, I made Theresa's baked bean sausage rolls. She didn't give a detailed recipe so I just made one up, based on her description, assuming that she probably had actual home made US-style baked beans instead of the canned ones I used. I agree with her assessment, they were some of the best vegan sausage rolls I have made. The kids loved them. They have also been popular cold in the children's lunch boxes. I pop a frozen one in before school and it defrosts by lunch time. 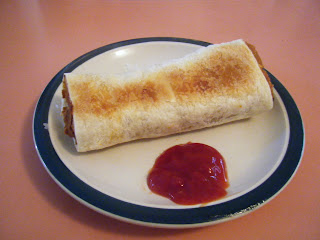 Method
Can be eaten straight away, reheated for a few minutes in the microwave or frozen for later. For smaller cocktail-sized rolls, cut each roll into 3 before baking. 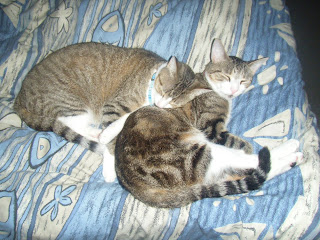 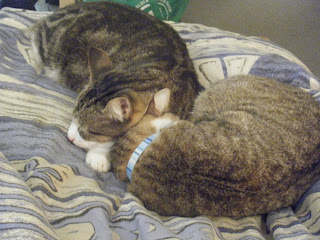 As you can see, Berry and Switch are very fond of each other. They are litter mates who have lived together their whole life. As the weather gets colder, they love to sleep snuggled together.
Posted by BrisVegan at 5:12 PM 3 comments:

Theresa at Tropical Vegan had these sausage rolls on her blog. They looked amazing, so I stole her idea. I processed a tin of baked beans with oats, soy sauce and herbs. I rolled them in Borg's puff pastry. Yum! Thanks Theresa!
Posted by BrisVegan at 6:37 PM 1 comment: 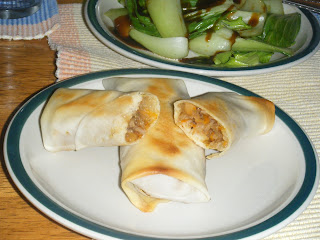 My kids love spring rolls. We frequently by large packs of vegetable spring rolls (60 or 64) from the supermarket, because they are quick, easy and good for dinner or lunch boxes. I have often thought that they must be easy to make. My sister-in-law (hi Madonna!) told me a while back that she makes her own spring rolls and oven bakes them for a lower fat option. When I saw spring roll pastry on special at Woolworths, I decided to give her idea a go.

They worked out pretty well. We had half of them for dinner, with rice, tofu, greens and store bought vegan BBQ buns. The kids will have the leftovers for lunch at school. One advantage of no meat is that they are much less likely to spoil in a lunch box and the kids get a nice serve of vegetables.

I will admit up front that I don't have a great history with pastry. I think I overwork it. However, I buy a mean puff pastry (Borg's - it says "Vegan" on the packet!"). After visiting Vegan Dad's excellent blog and seeing his croissants, and in spite of my pastry history, I decided to give them a go for Mother's Day. M asked if she could help. I used this recipe from Jennifer of Vegan Lunch box fame.

First step was to mix the simple yeast dough and let it rise. That bit was easy enough. We then punched it and M rolled it out: 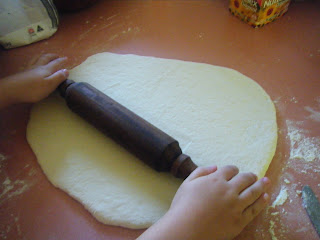 After that, we added a layer of margarine (Nuttelex): 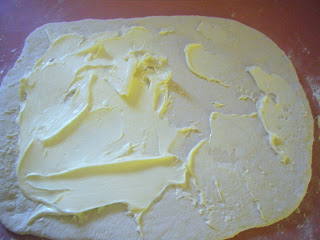 I tried rolling and freezing the margarine as Jennifer directed, but the Nuttelex did not freeze hard. Instead, I just spread it around.

After that, we folded it as directed: 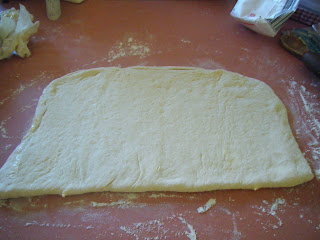 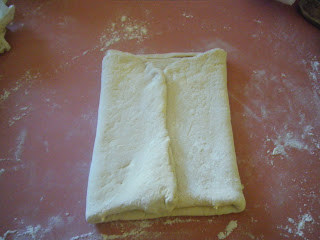 We then refrigerate, re-rolled and refrigerated the folded dough several times as directed.

Finally, we shaped them: 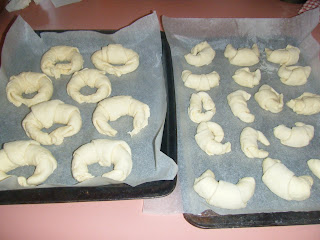 And here is one the next morning on my breakfast tray, as arranged by M, who made me breakfast in bed: 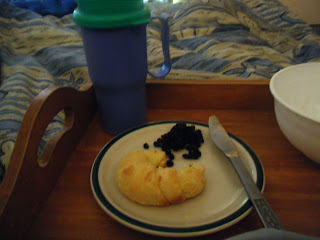 (By the way, the tray was made by J, who gave it to me for a present last year. He is very talented at woodwork and is toying with carpentry for a career idea.)

How were the croissants? The flavour was excellent and they rose well. The whole double batch was eaten by our family on Mother's Day. However, they were a bit more bread-like than flaky inside. That's probably done to the Nuttelex not cooling hard and me over-enthusiastically rolling it. However, I need to give another recipe a go to see if it's the recipe or me. (I'm guessing me!) 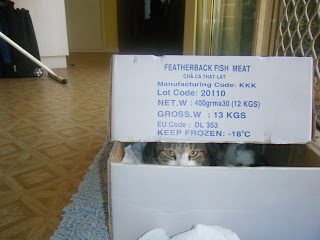 Berry's Box: Enter at Own Risk

Our cats love boxes and hiding places, so we grabbed a box the other day from a pile at the shops. Berry commandeered it, though Switch frequently sniffed it, interested in smells that we couldn't detect. We realised why it was so popular once we actually read the details on the front of the box!
Posted by BrisVegan at 11:32 AM 3 comments:

I have a few fruit trees in pots. One is a lemon tree. A bit over a month ago, I harvested a couple of lemons. Here is the first one: 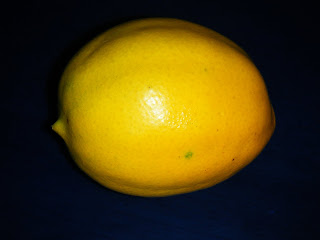 If life gives you a lemon, make Lemon Muffins! 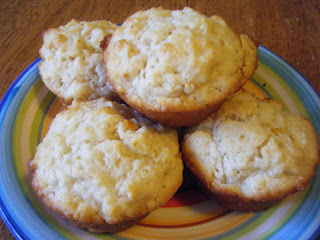 These were made using the lemon poppy seed muffin recipe from Vegan With a Vengeance. I didn't have any poppy seeds, so I left them out. They were pretty good. M and I are big fans of lemon baked goods, though the guys of the house aren't so keen. More for me! 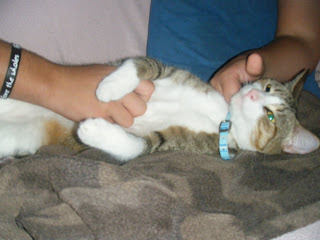 Miss Switch accepting scratches from both Z and J. She was purring like mad and rolling on her side and back to encourage tummy scratches.
Posted by BrisVegan at 8:12 PM 4 comments: 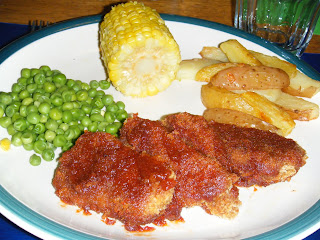 Do you like seitan? Bake bread? Feed kids? If you answer yes to any of these, you have to go and see Vegan Dad's blog. His food is consistently amazing and appealing.

These are Vegan Dad's Hot Wings, with his Sweet and Sticky Sauce. In this meal from a while ago, I served them with peas, corn and homemade chips. They are little breaded seitan chunks served with a sweet tangy sauce. My kids love these with a passion. Try them. They are seriously good. They also freeze well for a quick meal. I always double the recipe and freeze half of them.
Posted by BrisVegan at 3:08 PM 4 comments: 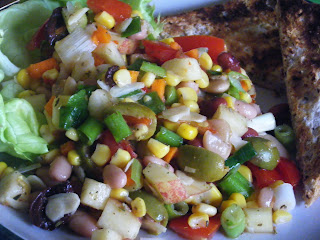 I made a big bowl of salad Last Friday and have been eating it ever since. It was great.

Ingredients
Dressing Ingredients
Method
This would also be good with extra tomato, added grains, eg leftover rice, or a few teaspoons of olive oil in it.
Posted by BrisVegan at 6:45 PM 2 comments:

Two months?! I can't believe that I have ignored this poor blog for that long. Life stuff has been hectic, but still ... two months!

Anyway, I'm back with mini spinach calzones. I needed to take a plate* to a party last night, so I threw these together quickly. I had the dough for a pizza base in the freezer, as well as some spinach and some Cheezley cream cheese, so I decided to combine a couple of favourites, spinach and calzones. I also like my party nibbles small and not too messy, so these worked well. 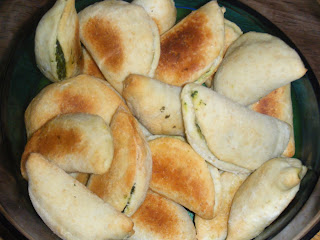 Ingredients
Method
I served them cold, in a large bowl. They were delicious and popular. They had a thin crust of pizza bread with a nice substantial serve of savoury spinach filling. I think that they would also be good in lunch boxes or made into approximately 6 larger calzones as part of a meal. The kids loved them, so I'll be making these again. 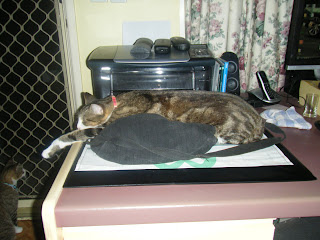 Note
* For the non-Australians, the Australian phrase "bring a plate" means to bring food to share appropriate to the type of event. It can mean to bring a main dish, a side, a salad, a dessert, finger food or any similar item to share. I'm told this phrase is far from universal and that it has led to confusion for non-Australians in the past.
Posted by BrisVegan at 2:00 PM 6 comments:

BrisVegan
I am a 30 something vegan living in Brisbane, Australia, with my husband and 3 children. I enjoy gardening, cooking, scrapbooking and being with family and friends. I work full time as an academic.

Veg*n blogs from around the world